Solifuges are commonly recognized as fast-moving, voracious hunters. The following accounts and images, kindly provided by Joe Furman of Houston, Texas, clearly document an alternative feeding strategy: They do, at times, opportunistically assume the role of scavenger.


"In March of 1992, I went to Namibia in southwestern Africa with a group of four people from the Houston Zoo Reptile House to photograph and collect reptiles and Amphibians. One night, while road collecting near the town of Khorixas, which is located just southwest of Etosha National Park, we noticed a very large male solifuge running around on the tar road in front of our lights. The temperature was warm, in the 80's [degrees Fahrenheit]. The solifuge was carrying something, so we stopped to see what it was. He was carrying a 12 inch long juvenile Namib Tiger snake (Telescopus semianulatus) in his jaws. This snake was obviously a road kill and very flat and dead. It had likely been run over in the morning and sat in the sun all day by the look of its condition. The solifuge ran around carrying the snake until it stopped half under a small plant, where we photographed it. I kept a list of the animals we'd seen each day. The entry for April 1, 1992 reads, 'Something huge was running on the road before us, no, not an elephant. It was the biggest Sun Spider I've ever seen!' "

"On another visit to Namibia in 1996, while visiting the coastal town of Luderitz on road B4, I witnessed a solifuge eating a freshly road-killed Barking Gecko (Ptenopus garrulus). The gecko had recently been run over, and a black tenebrionid beetle was eating it. A very small solifuge was also moving around the gecko and beetle. I took some pictures and videotaped the scene. While the beetle was eating the gecko's entrails, the solifuge moved from place to place around the gecko until it found a place where the gecko had not been torn open, then started sawing back and forth with its chelicerae into the gecko's skin. It was a cool evening. I'd say 60 degrees Fahrenheit. The tar road was warmer." - Joe Furman. 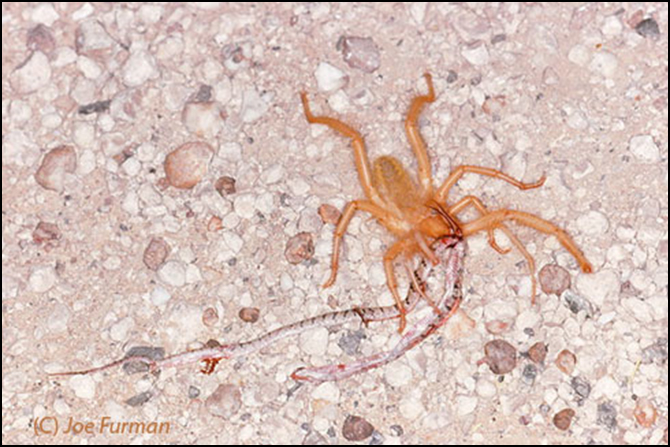 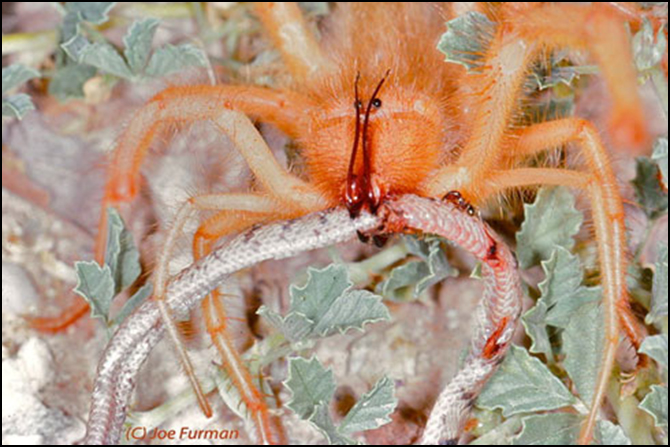